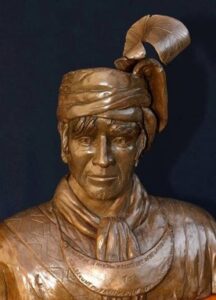 The Blountstown Public Library is honored to be the recipient of a sculpture of Chief John Blount by nationally esteemed artist and sculptor Cliff Leonard. Leonard’s sculptures have been displayed in numerous art exhibits and pieces can be seen in homes and public buildings across Florida, such as the University of North Florida in its new Military and Veteran Resource Center. The bust of Chief John Blount will be permanently and proudly displayed in the front foyer of the Blountstown Public library.

Mr. Leonard is the rare individual who realized before it was too late that life is in the moment, cannot be taken for granted and that creative gifts must be expressed. At the age of 48, Mr. Leonard had a heart transplant; a life-changing event for anyone and for Leonard a sudden realization of purpose for the rest of his life. For an individual who had not yet discovered his talent it gave him the insight to realize he had the interest and desire to become an artist. Since that point sculpting, carving, and pottery have become his chosen mediums for expression.

Some might say that Cliff Leonard came into art and portrait sculpture a bit late in life.  Cliff was born in Calhoun County, Florida where the area’s pristine beauty plus the work ethic of farmers, loggers, and fisherman helped him develop his insight and perspective for sculpting faces and the human figure.  His work is reflective of his honesty in character and clarity of purpose. During the formative years of his youth Leonard attended Calhoun County Schools along with his sister, Mary Alice Minnick. His Mother, Alice Foster Leonard, was his major influence during these years along with two grammar school teachers, Miss Golden and Mr. Hanna, who were always positive and encouraging. Leonard said, “I always felt I was a triangle and my teachers tried as they might to put me in a square or circular hole. Try as they might, I would never stay put in a hole that did not fit.” Fortunately for the world Mr. Leonard has found his niche.

When asked who or what got him interested in art, he says, “I remember my Mom dabbled in painting as did one of our neighbors. I feel sure my interest was piqued at that early age. There was really no outlet or even a place to explore art in Blountstown during that time, at least for boys. I have since seen page after page where I had colored, decorated, or drawn pictures in Mom’s scrapbook. Of course, none of it was being displayed any place other than Mom’s refrigerator door; probably where it belonged – by the way. Whenever I had a chance to watch someone whittle, carve or paint I was always fascinated – it was magic.” 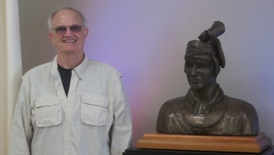 Cliff Leonard’s overriding purpose has been to honor sacrifices Marines made during the Viet Nam War and subsequent conflicts. A Marine Veteran himself, Leonard creates busts of fallen servicemen as gifts to their families or to places that he believes will honor the sacrifices these courageous men have made for their country. The first was of Nate Clemons, a 20-year-old private killed by a roadside bomb in Iraq in 2005. He presented it to Clemons’ Grandparents during a tearful meeting of the Semper Fidelis Society. It was later installed permanently at the Terry Parker High School; Clemons’ Alma Mater.

Leonard clips pictures of the fallen servicemen from newspapers or prints them from the Internet and hangs them in his workshop at his Avondale home. Sometimes he contacts family members for better quality images. Then he meticulously molds the water-based clay into their likeness, a process that takes about two months of fine-tuning. Once it is fired and ceramic, Leonard mixes three or four colors of acrylic paint until he has achieved a bronze tone. He finishes the busts with a coat of black and brown shoe polish to give the piece a vibrant patina. The Calhoun County Court House exhibits a sculpture by Leonard in the main entry and it exemplifies his vision, art and skills as a sculptor.

In the creation of the bust of Chief John Blount; Leonard was in frequent contact with Mary Sixwomen Blount, who is the Principal Chief and Spokesperson for the Apalachicola Band of Creek Indians in Texas.  Chief Sixwomen aptly refers to Cliff Leonard as “Two Hearts” and it is safe to say that he is permanently in the hearts of the families whose sons he has honored.  The Blountstown Public Library recognizes Cliff Leonard’s gracious contribution of the bust of Chief John Blount to its permanent collection.